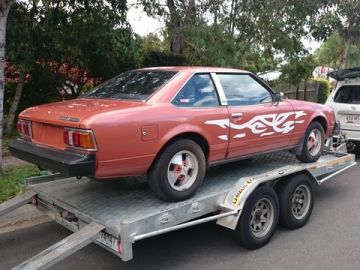 Our next project is underway - we are building an RA40 Celica race car for historic touring car events and racing.

This humble looking RA40 complete with 'street mods' is going to be transformed over the next couple of years into something special.

Plans for the build include a race-spec 18RG twin cam engine, similar to what was used by the Williamson Celica's in the Australian Touring Car Championship ('ATCC') of the early 1980's.  These cars were often referred to as the 'camera in the car' Celicas that helped Channel 7 (Australia) develop the in-car camera technology that got taken around the world.

Also similar to the Williamson Celica's a body kit will be applied that was compliant with the Group C rulings of the era and allows for an increased tyre with and diameter. When it comes to wheels there are a lot of choices that are period correct, but our current preferred is the BBS mesh style used in the era. A disc brake rear-end is highly likley with a Watts link arrangement. Up front adjustable coil overs will be made to order and installed.

Keep watching we plan to update the pics here as the build takes shape.

RN56 Hilux - where it all began 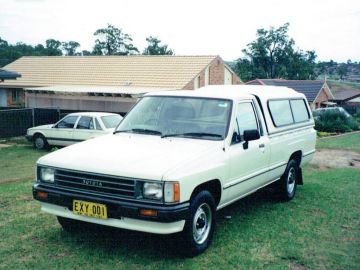 During the late 1980's and into the early 1990's we owned our first business exporting used British car parts to Malaysia and Singapore.  For the business I needed a reliable work horse capable of carrying a good payload and basically something indestructible.

However, for many years like most Australian young males I had been supporting one of the local 'big three' manufacturers buying mostly Holden cars and Toyota were not really on my radar. By chance late one evening I was passing by a car sales yard in Campbelltown, and I noticed this Hilux ute in remarkable condition. A quick inspection revealed on the sales slip that the Hilux had only 22,000kms on the clock!

I promptly returned the next day to enquire some more about this great looking Hilux. She had been owned by Orange City Council and serviced on the dot for each and every servicing interval. Took her for a drive around the block and was immediately converted to Toyota. The long bed was immaculate inside too as it had only ever carried leaves, lawn clippings and garden rakes - and after each use was hand brush cleaned!

We had the Hilux for a number of years. Our family situation changed and our business was also wound down. I sold the Hilux shortly after and have regretted selling her ever since...fond memories of my dog 'Buddy' riding in the back and the perfect fit with what we now do today says to me I should never have sold that Hilux. 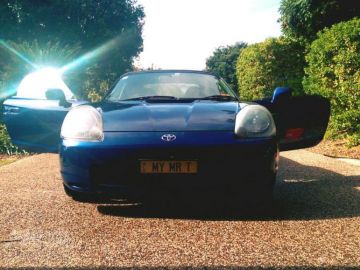 This is Chris' daily driver and although not within our pre-1985 bandwidth its a classic all the same. Chris purchased this Spectra blue beauty a couple of years ago now and since then has been busily restoring and modifying his pride & joy.

Like many MR2's the soft-top after 10 years was in need of replacing. A replacement cloth fabric unit was purchased from eZon in the USA and installed at Road & Track Ipswich (QLD). Chris installed a new sound system for cruising to his own beats.

Planning for future upgrades, Chris is considering a 2ZZ-GE engine conversion along with a six speed gear box. A body kit and spoilers is also being planned as well as some after market wheels. 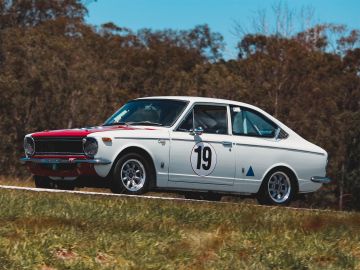 This is where it all started for our business called Toyota Heritage - this KE17 was a 'complete' and road going purchase in 2010. Although complete, she was also in a sad state and needed restoration. An inability to source certain parts meant that the new owners had to get their own parts manufactured!

The owners had originally been considering an RT54 Corona (1600GT) but found these to be ineligible for historic touring car racing (Group Nc) in Australia. KE17's are eligible for historic racing due to the fact that Christine Gibson (nee Cole) had punted one around Warwick Farm in 1969. It was then an easy choice and the KE17 was purchased from the Blue Mountains Area in NSW and transported to Brisbane.

The car has largely been restored and race prepared by the great team at Road & Track in Ipswich QLD. All of the work done on the car is consistent with Group Nc rules and the car was log booked with CAMS in February 2014.

Owners, Gary and his son Chris have had the KE17 on the track a number of times now and pics are a plenty on the 'TH' face book page.